The life of a B2B marketer is full of decisions.

Start using first-party data now, or wait until Google gets rid of third-party cookies in 2023?

Outsource design or beg your in-house team to move your projects up their to-do lists?

Spend extra on that *premium* swag, or stick with pens and mugs?

Use image or video ads on Facebook and LinkedIn?

That last question is common among B2B marketers—do they look toward the future (video) or stick with what they know (image)?

The answer to the “old-vs-new” conundrum may surprise you.

Keep reading to learn more about when image ads still make sense—and when video ads do—and best practices to ensure they break through the noise.

The growth of CTV, OTT and video-first platforms like TikTok is pushing all-things video to unprecedented heights.

Advertisers are responding by opening their wallets more than ever— video ad spending is expected to surpass $180b this year and $318.8b by 2027.

Google anything related to digital advertising in 2022 (and beyond) or talk to any B2B marketer, and you’ll get nothing but love for video.

So, why the heck are marketers still asking this question?

Because both video and image ads shine in different situations.

When do video ads make sense?

The inherent nature of video ads and their core purpose positions them differently than image ads.

While image ads aim to push people off the platforms, video ads attempt to do the opposite.

Think about it: What do you want someone to do with your video ad?

To do that, they have to stay on the platform, making video ads ideal if you’re trying to build brand or product awareness.

When do image ads make sense?

There’s no denying that video ads are the shiny object that most advertisers (and customers) can’t look away from.

There’s also no denying that video ads are out of reach for some due to nothing more than bandwidth or creative restraints.

Let’s be real: even a 15-second video ad requires a ton of resources. If you want to launch a series of them with experiments, you’re likely looking at weeks of development.

With the headwinds of an uncertain economy and pressure to do more with less, this is something many marketing teams can’t afford.

Luckily, if you’re in this camp, you’re not falling behind. Image ads actually don’t deserve their bad rap. In fact, they drive a better cost per lead (CPL) than video ads.

Again, when the name of the game is efficiency and budget maximization, the value of image ads can’t be understated.

From a tactical standpoint, image ads shine if your goal if you’re trying to push people off the platform toward conversion—like to a blog post or a free trial page.

So, we know image ads still deserve a place in your marketing toolbox.

The question now is: how to do them right?

Here are 9 best practices to ensure you’re getting the most out of your image ads on Facebook and LinkedIn:

This shouldn’t be surprising, but people are tired of social ads.

After years of rogue advertising that saw marketers spew ads across the Internet without regard for the experience and channels, consumers are fighting back.

It’s why ad blockers are popular and third-party cookies are going away.

In reality, people don’t hate ads; they hate ads that are jarring and don’t provide value.

The increased spending on native ads is a sign that marketers are seeing the writing on the wall and taking steps to reverse the troubling trend.

This is how you should think about your image ads on Facebook and LinkedIn.

While there’s no “native ad” setting in these tools, you can take steps to ensure you’re creating something that blends into its surroundings, like removing your logo from the actual ad.

The example below from Marketing Science Consulting Group, Inc. screams native because it matches what people expect when they’re scrolling through LinkedIn: information. It’s not trying to sell. Instead, it’s providing value.

Every ad asks someone to do something.

Whether that’s downloading a piece of content, signing up for a free trial or watching a video, there’s an ask at the core of every ad.

People know this, which means you don’t need to include a call-to-action (CTA) button in the ad itself.

For starters, the native tools in Facebook and LinkedIn have built-in CTAs. While they lack the flexibility to experiment with copy—you’re confined to a handful of pre-selected options—they serve their purpose.

From a design standpoint, including an in-image CTA can also create a jarring experience, which takes away from the native experience that should be your north star.

3. Use the right dimensions

A scroll through Facebook or LinkedIn will bring you face to face with a healthy mix of square and rectangular images (both ads and organic posts).

Variety is the spice of life, but our data shows that consumers don’t fancy ads of all shapes and sizes.

In reality, they overwhelmingly prefer square ones.

It has everything to do with the continued rise of mobile and consumers’ appetite to consume social content on these devices. And a square image fills up more of the screen as someone is scrolling through their feed.

To put this into perspective, more than 98% of active Facebook users access their accounts via mobile phones.

While LinkedIn users don’t opt for mobile to quite the same degree—LinkedIn scrolling is often reserved for the workplace and desktops—more than half of them use mobile devices to access the platform.

4. Bring your images to life

An image is worth a thousand words—except when it’s a boring stock image that does everything but captivate.

In this case, it’s just a flame burning a hole in your pocket. In a day and age when cost-efficiency is key and maximizing your budget is a must, this is something you can’t afford (pun intended).

Image ads don’t have to be boring, and while video ads may be out of reach due to bandwidth and creative restraints, that doesn’t mean you can’t bring them to life with animation.

Something as simple as moving text or background music can go a long way in turning a blah ad into something that drives your bottom line.

5. Make sure the image and copy mesh

What’s the most important part of an image ad?

It’s not a trick question, I promise.

That said, overlooking how the copy—both the ad text and the headline—plays with the image is a mistake that’ll cost you clicks.

One of the major reasons video ads are so effective is that they combine movement and sound (via the spoken word) to tell a story.

Image ads don’t have this luxury, putting more pressure on you to get your message across in a way that encourages engagement.

To do that, it’s essential that the copy adds context to the image and tells a story that’s compelling enough to generate interest.

This example from Intuit Mailchimp is a good example of that.

6. Pay attention to the length

The phrase “less is more” is permanently ingrained in the mind of nearly every B2B marketer. If it’s not yet, it will be for the next several quarters as companies go into fight-or-flight mode to fend off the recession.

The phrase applies to copywriters, too.

In a world with such short attention spans and information overload, copywriters are accustomed to using the fewest words possible. The thought, at least historically, is that no one wants to read a wall of text.

I certainly don’t, which is why it’s surprising to see that less isn’t always more when it comes to the copy of an image ad.

While our data showed that longer ad text performs better on Facebook, the opposite is true on LinkedIn.

Regarding the headline, CTRs are higher for ads with longer headlines, while CPCs are lower.

These stats should be a wake-up call to marketers, considering that roughly half of the ads placed on both LinkedIn and Facebook sported headlines of fewer than 39 characters.

Is that true? Eh, I’m not so sure. It’s dated and seems unrealistically high.

It’s a foregone conclusion, however, that ad loads are rising and consumers are bombarded with messages from brands.

The only way to break through is to spark their curiosity, like with these ads below from Yelp and The Predictive Index, that effectively make consumers think and want to learn more.

8. Stay away from stock images

Seriously. It’s time to break up with iStock, Pexels, Unsplash and every other source of stock imagery on the Internet.

Tell them it’s them, not you.

Using stock images is a surefire way to let someone know that they’re looking at an ad, which goes directly against your need to create something that looks nothing like one.

Instead, feature real people that create a connection with consumers.

This approach works for the same reason influencer and creator marketing is popular—people connect more with real people versus no-names on the other side of the screen.

You may not be blowing smoke, but consumers don’t know that.

So, instead of throwing out wild claims, use stats to back up what you’re saying and deliver indisputable evidence that what you’re selling—tangible or not—can provide value.

You get the best of both worlds

Despite the rapid shift to video, image ads aren’t going away.

In fact, they clearly have a place in B2B marketing strategies. 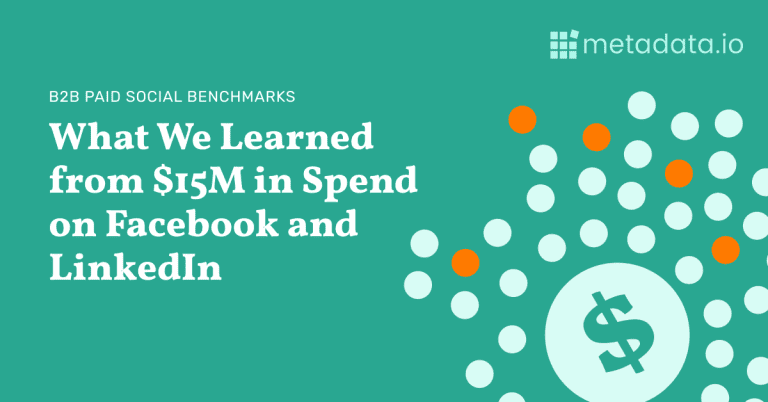 B2B Paid Social Benchmarks: What We Learned From $15M in Spend on Facebook and LinkedIn 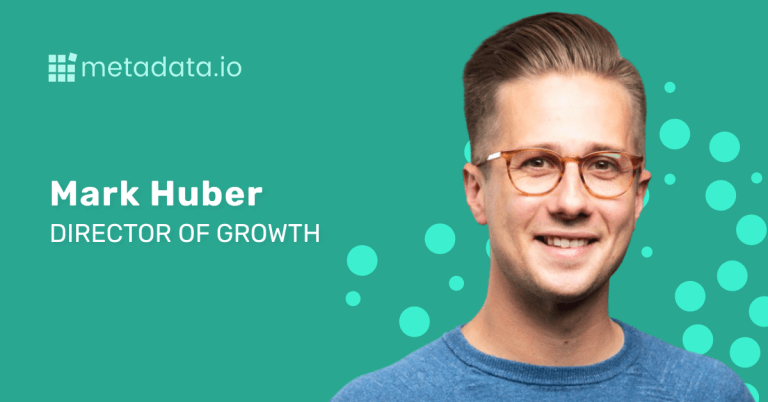 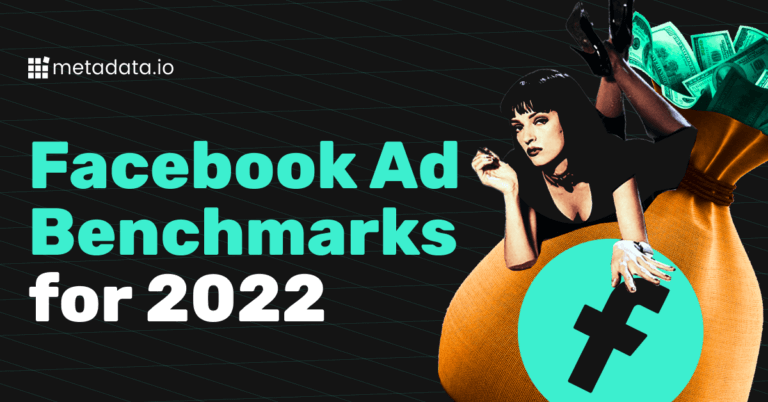 Get emails from us